Join Lorna for this Irish folk classic. You’ll go through all the parts of the tree, the nest, the bird, a feather, etc., by adding a new word with each verse. In the end, it’s almost a memory game! And then you’ll add in some fun actions as well, not forgetting to clap and singalong during the rousing chorus! Oró here we go!! 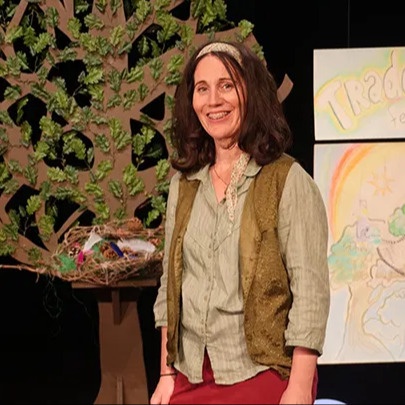 Lorna McLaughlin is a contemporary singer and songwriter, and core member of the band The Henry Girls. As well as being a seasoned performer, she has vast experience running vocal workshops, choirs, festival events and training for teachers, delivering classes and workshop to thousands of people all over Ireland and beyond, of all ages and abilities. Lorna’s work with the Henry Girls has seen them write music for plays, films, contemporary dance shows and they have also released six albums, mostly of original music. They have performed at festivals such as Glastonbury, Celtic Connections, Cork Jazz Festival, Milwaukee Irish Festival, to name a few, and have toured extensively in Germany, Austria, America, UK and of course in Ireland. Lorna is a co-founder of The Inishowen Gospel Choir and was one of their Musical Directors from 2005 until 2010. In that time, they performed at festivals all over Ireland, The UK and parts of Europe and they collaborated with highly acclaimed musicians such as Moya Brennan, Cara Dillon, Foy Vance and Duke Special. She has also worked extensively with organisations such as Live Music Now, Simply Music, DMEP (Donegal Music Education Partnership), Music Generation Laois and Letterkenny Summer School of Music, delivering concerts and workshops in hospitals, prisons, nurseries, schools, preschools and elderly units all over the UK and Ireland. Lorna has been lecturing at BIMM Dublin since 2017 as a vocal styles tutor. She is a highly skilled, experienced and sought after as a music facilitator and is passionate about empowering teachers and students to become more confident about their musicality.